Archive for category Back 2 the Basics :)

Posted by almuqarraboon in Allah (swt), Manners & Characteristics of a Believer, Reminders Profit Believers on December 17, 2012

Posted by almuqarraboon in Allah (swt) on October 4, 2012

By Allah, if Muhammad ibn Idrees [referring to himself] did not believe with a certainty that he would see his Lord in the Hereafter, he would not worship Him in the dunyah.

The Wisdom Behind Repetition in Prayer

Posted by almuqarraboon in Manners & Characteristics of a Believer, Salah, Short and Inspiring Quotes on September 16, 2012

The Wisdom Behind Repetition in Prayer

“… And it has been prescribed for the servant to repeat these actions and words (i.e. repeat recitation of al-Fatiha, rukoo’, sujood etc, in the prayer) as it is a source of nourishment for the heart and soul. There is no strength in them (the heart and soul) except through this.

Its repetition is just like repeatedly eating food – mouthful after mouthful until a person eats his fill, and drinking again and again until his thirst is quenched. If a hungry individual only took one mouthful of food and then pushed his food away, what will that mouthful do for him? In fact, it may even cause him to become hungrier!

For this reason, one of the Salaf said: ‘A person who prays but does not find tranquillity in his prayer is like a person who is hungry… food is brought to him but he only takes one or two handfuls. What will it then do for him?!’”

Most of the time, a person’s level of Iman, khushu’ (humbleness), and depth of spirituality increases in stages, and doesn’t occur overnight or with one act of ‘Ibadah alone. For this reason, Allah legislated that the soul undergo repetitive acts of ‘Ibadah for it to attain higher levels of Iman; so in the case of prayer, a slave offers it no less than 5 times a day and if they feel themselves lacking in spiritual nourishment, they should increase in nafl (supererogatory) salah until their soul begins to feel nourished and the empty voids are all filled. The same with other acts of worship and the soul will soon taste the sweetness of Iman (faith) and climb up from rank to rank in the Sight of Allah.

The Majectically Magnificent by Boona Muhammad

Posted by almuqarraboon in Allah (swt) on September 7, 2012

Posted by almuqarraboon in Salah on September 5, 2012

The Excellence of Qiyaamul-Layl and its Effect in Increasing Eeman

Posted by almuqarraboon in Salah on August 22, 2012

If the Muslim carefully considered Suratul Muzammil, he would find the greatest lesson in it, since Allah, the One free and far removed from all defects and the Most High, ordered the Messenger of Allah salAllahu ‘alayhi wasalaam to establish the Night Prayer when he was in the direst need of help and assistance. So there is in the saying of Allah, the Most High:

So indeed there must be hidden benefits arising from the night prayer. Indeed it is a preparation for men. It makes the hearts firm upon the truth and further strengthens them. It is the secret of success. It distances a person from sins and evil actions. It increases eeman. It causes a person to be joined with the righteous and raises him to the level of the sincere worshipers.

From Abu Hurayrah radiyaAllahu ‘anhu, the Messenger of Allah salAllahu ‘alaihi wasalaam said: “The best fast after the month of Ramadhan is in the month of Muharram, and the best prayer after the obligatory prayer is the Night Prayer” [Reported by Muslim (Eng. Trans. 2/269/2611), Abu Dawood (Eng. Trans. 2/668/2423), at-Tirmidhee, an-Nasaa’ee, and Ibn Khuzaimah in his Saheeh]

From ‘Abdullah ibn ‘Umar radiyaAllahu ‘anhu who said, the Prophet of Allah salAllahu ‘alaihi wasalaam: “In paradise, there is a (raised) chamber the outside of which can be seen from its inside, and whose inside can be seen from its outside. So Abu Maalik al Asha’aree asked: Who is it for O Messenger of Allah? He replied: For those whose speech is good, who provide with food and who stand the night (in prayer) whilst the people are sleeping” [Reported by at-Tabarani in al-Kabeer with a hasan chain of narration, and al-Haakim who declared it saheeh to the standard of al Bukhari and Muslim]

From Jaabir radiyaAllahu ‘anhu, who said that I heard Allah’s Messenger salAllahu ‘alaihi wasalam say: “Indeed in the night there is an hour which no Muslim man encounters whilst asking Allah for the good of this world and the Hereafter except that He gives it to him and that is every night” [Reported by Muslim (Eng. Trans. 1/365/no. 1654]

From Abu Umamah Baahili radiyaAllahu ‘anhu, the Messenger of Allah salAllahu ‘alaihi wasalaam said: “ Perform the night prayer, for it was the practice of the pious before you, and draws one near to Allah, the Most High, and is an expiation of sins and a prevention of evil deeds”. [Reported by Ahmad, at-Tirmidhee, and others and found in Saheehul Jamee’ (no.3958)]

“Indeed I saw some 30 angels all scuffling to see which one of them could record it.”

Posted by almuqarraboon in Salah on August 11, 2012 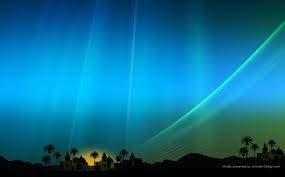 One day we were praying behind the Messenger of Allah ﷺ and when he ﷺ raised his head from the position of ruku` (bowing position), he said: “Sami Allahu leman hamidah” – ‘Allah hears the one who praises Him’. A man from behind added: رَبَّنـا وَلَكَ الحَمْـدُ حَمْـداً كَثـيراً طَيِّـباً مُـبارَكاً فيه “Rabbanaa wa la kal hamd, hamdan katheeran tayyiban mubaarakan feeh” ‘Our Lord, all praise is due only to You, praise which is abundant, excellent and blessed.’ When we finished [the prayer] the Prophet ﷺ said: ‘Who spoke?’ The man said, ‘I did’. He ﷺ said, ‘Indeed I saw some 30 angels all scuffling to see which one of them could record it.’ [Muslim]

Posted by almuqarraboon in Salah, Short and Inspiring Quotes on July 24, 2012 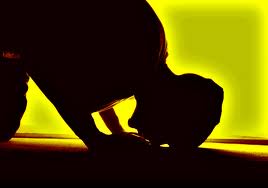 Al-Ḥātim b. ‘Āṣim (raḥimahullāh) was one of the tabi‘īn. He was asked, “How do you attain tranquility in your prayer? We see you so engulfed. How do you reach that level?” He said, “Before I start, I imagine the ṣirāṭ (bridge over Hellfire) in front of me. I imagine Jannah is on my right and Hellfire is on my left. I remember that the one who does not pray his ṣalawāt in this world will be grabbed by a hook on the ṣirāṭ and have to make them up in Jahannam. Then I imagine the angel of death is standing behind me, and I don’t know when he is going to attack. Then I imagine that the Prophet (ṣallallāhu ‘alayhi wa sallam) is standing in front of me to monitor the correctness of my ṣalāh. Then I remember that Allāh, Who created all of that, is monitoring me. Then I start.”
From the class: Behind the Scenes by Sh. Omar Soleiman
Qabeelat Madinatayn PPN, page 135

Intro from a Description of Paradise by Ibn al Qayyim

“And when those of certainty came to know what they were created for and for what purpose they came into existence they raised their heads high.  When they knew that paradise was elevated for them they rolled up their sleeves for it.  And that the straight path was made clear to them so they were firm as they traversed upon it.  And they saw that the greatest inequity is to sell that which no eye has seen, no ear has heard, and has not been conjured up by the imagination of any soul in an eternity that never ends for a temporal life, rather something only like a false dream, or a vision that visits during sleep, corrupted by disturbances, paired with torments.  If it brings some laughter it brings much weeping, and if it causes happiness one day it causes sadness for months.  Its pains are greater than its pleasures and its sorrows are many folds greater than its happiness.  The first of it is fear and the last of it is ruin.

What amazement at a fool in the shape of a wise person, and an imbecile in the clothes of a person of intellect, who preferred a portion that is perishable and lousy, over a portion that is eternal, and sold a paradise that is equal to the heavens and the earth for an earth that is a constricted prison shared amongst a people afflicted by impairments and calamities.  And (sold) goodly homes in gardens of Eden under which rivers flow, for a camel stable- constricted and ends with ruin.  And (sold) loving virgins, equal in age, as if they are like rubies and coral (in beauty), for foul, lowly women who would take a boyfriend or commit adultery.  And Hoor with restricted gaze awaiting in tents, for filthy ones who would curse amongst the people.  And (sold) rivers of wine a pure pleasure for those who drink, for an impure drink that does away with the mind and corrupts one’s wordly and religious life.  And (sold) the pleasure of gazing at the Face of the All-Great and the Most Merciful, for the pleasure of glancing at hideous lowly faces.  And (sold) the experience of listening to the address of Al-Rahman, for the experience of listening to music and singers.  And (sold) the reclining on thrones of pearls, rubies and chrysolite on the Day of Increase for the reclining on gatherings of transgression with every wandering devil.  And (sold) the calling of the caller “Oh people of paradise: For you here is everlasting bliss and no despair, and everlasting life and no death, and everlasting residence and no relocation, and everlasting youth and no aging” for the songs of singers…